On August 31, 2008 (pictured above), Rafal asked me to accompany him to the Du Quoin State Fair in Southern Illinois. We rode rides, we drank brandy from a flask, and ultimately, we made out in the back of our friend Alex’s Oldsmobile while a cassette of the Fugees played. We’ve pretty much been inseparable ever since. 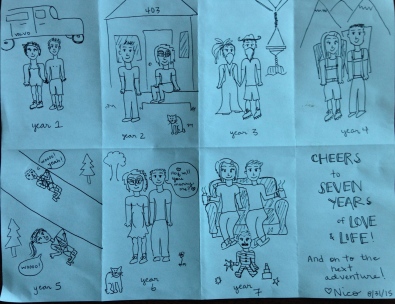 To celebrate our anniversary, Rafal brought Lydia and I on a surprise to trip to Virginia City, Montana. Virginia City is a ghost town leftover from the Montana gold rush that has been turned into a kind of living museum. We drove past it on our way to Amber’s wedding a few months ago and I fell in love. We stayed at the haunted Fairweather Inn, ate old-fashioned homemade ice cream, and panned for gold. But the cherry on our anniversary cake was seeing the Brewery Follies Variety Show.

The Brewery Follies Variety Show is billed as “an Absurd, Wacky, Zany, Fun-Filled, Contemporary Comedy Revue with music in a Cabaret Atmosphere that contains Biting Parody and Naughty Political/Social Satire” (breweryfollies.net). Essentially, they have taken an defunct “historical” brewery and turned it into a DIY theatre space. Then they put on a decidedly raunchy sketch comedy show with musical numbers. Naturally, I adored it. 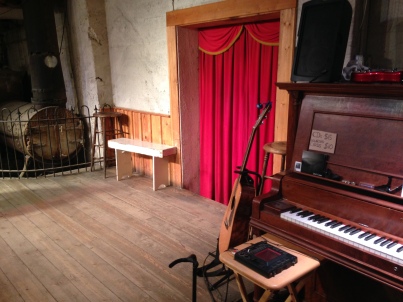 When we walked up with a baby in our arms, they stopped us at the door. “Do you know the content of the show?” more than one person asked as we purchased our tickets and found our seats. “Oh yes,” we replied, “We don’t censor the baby.” They put us near an exit in case we needed to make a quick escape. Honestly, we had no idea how Peanut would handle this experience. The show didn’t start until 8pm, so she was already up past her bedtime. As we waited for the opening number and sipped on Sarsaparilla soda pops, she did begin to fuss, but I swaddled her up in her baby wrap next to my chest and fed her the bottle I’d brought along. Before the end of the second scene, she was fast asleep. She would stir whenever loud laughter or applause erupted, but then settle back into her cozy nook. 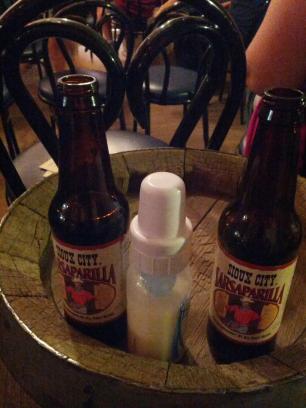 We had arrived in Virginia City around 2 that afternoon, and in the blink of an eye it was 6pm and everything was closing down. Hmmm, we thought, I guess this really is a ghost town. But just two hours later at the H.S. Gilbert Brewery things were poppin! Almost every seat in the house was sold, beer was flowing like wine, and belly-laughs filled the cinder block room.

How on Earth had I ended up in this tiny Montana ghost town seeing this wild cabaret show?

The last eight months had been a tornado, a veritable twister of life events, a massive influx of energy—both hot and cold emotions—brought together to catapult us to a far away land. Like most storms of this type, it all happened so quickly. I am just now coming to. I am suddenly waking up.

The show was two hours long (with an intermission) and I could not believe how rapidly two hours sped by! It had been so long since I’d seen live performance! I was basked in the glow of performance energy! And these performers were giving it.

Two grey-haired older men and two lovely women in their mid-twenties comprised the cast. Between them, they played Bill and Hilary, a stoner from Missoula, Barbara Streisand, a naughty toddler, Rodney Dangerfield, and others. They did innuendo-filled ensemble numbers, like their riff on “The Island of Misfit Toys,” where they ask, “And what’s the worst kind of misfit? A classically trained actor telling dick jokes.”

The next morning we drove over to Nevada City (just a mile down the road), where we enjoyed a delicious breakfast and some of the best coffee I’ve ever had (a claim I do not make lightly!) at the Star Restaurant, before visiting the museum there. At the museum, we played with antique player organs/pianos (the largest collection in the world) and proto-cinema devices.

I did not encounter the notorious young girl ghost that haunts the Fairweather Inn, but I did feel a ghost of my old self near the edge of the Follies’ stage. The theater has always been my home, and still, there is no place like it.

So happy seventh to my main squeeze. He really knows how to click my heels.